I need more chipmunk voice. Because it’s better than a cowbell. (Thank you SNL for my ancient reference that the kids these days won’t understand)

I’m love the catchy beat with chirpy vocals and a subtle delicate piano that just creeeeEEEEeps in and out.  Really appreciate the build LION KINGS created with this one, expertly layering in more sounds without being overwhelming or cluttered, which I think is hard to do with a vocal sample like that (chipmunk winnnn!!) Then, like a glorious fart in a spring breeze, the bass drifts away to reveal them lovely piano notes I was diggin’ earlier.

Gonna keep an eye on you LION KINGS, I expect much more glory!!

Chill, Trap"Chill Trap", lion kings, u & no one else
Share :

I need more chipmunk voice. Because it’s better than a cowbell. (Thank you SNL for my ancient reference that the kids these days won’t understand)

I’m love the catchy beat with chirpy vocals and a subtle delicate piano that just creeeeEEEEeps in and out.  Really appreciate the build LION KINGS created with this one, expertly layering in more sounds without being overwhelming or cluttered, which I think is hard to do with a vocal sample like that (chipmunk winnnn!!) Then, like a glorious fart in a spring breeze, the bass drifts away to reveal them lovely piano notes I was diggin’ earlier.

Gonna keep an eye on you LION KINGS, I expect much more glory!!

Chill, Trap"Chill Trap", lion kings, u & no one else
Share :

I posted Los Angeles native ChrisB.’s Aqueous Transmission remix back in February and caught one of his live sets at an A-Bun-Dance after party in the hills. Good thing that house didn’t have a rug because it would have gotten cut. He had the whole living room turned into a dance floor. Chris is back on AudioMolly with an interview and a sweet new Buddha Bass remix! He will be playing live at the next A-Bun-Dance this Saturday at Lure, Hollywood and the second weekend of Coachella with the Do Lab on 4/20, go ChrisB.! 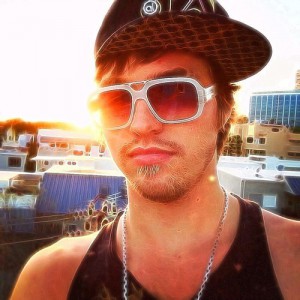 Summer: What are your musical influences?

ChrisB.: I have a very eclectic taste, so I have many different types of influences in my music. I grew up playing guitar, I was very into classic rock bands like Pink Floyd and Jimi Hendrix. I was also into jazz and funk. The first electronic music I was ever introduced to was STS9 way back in 2004. I loved the fact they fused live instrumentation in with all these new synthesized electronic sounds that I had never heard before at the time. The first “DJs” I was ever introduced to were people like Bassnectar, Glitch Mob, and Tipper when I was like 16 or so. Didn’t fully understand it at the time until I was able to experience that kind of music live. Lately I’ve been listening to a bunch of hip hop (which btw I never liked at all until I got into electronic music) as well as the new future beat stuff like Cashmere Cat. I’ll pretty much listen to anything just as long as it has a good melody.

ChrisB.: The first concert I went to was KISS. Jeez, I must have been like 3 or 4, maybe even younger. Gene Simmons and his family are family friends, so I grew up being around music at a really early age.

Summer: That’s so cool! What are your thoughts on the LA music scene and local acts?

ChrisB.: The LA music scene is pretty cool. Part of the reason why I still live here, although the only time I ever leave my studio is when a friend is in town playing music. Local acts like my Headtron brothers are absolutely crushing it, Sugarpill of course, Goldrush and jOBOT. Mr Carmack and the whole Team Supreme crew are making some huge waves right now too.

Summer: Which do you find more enjoyable: making a remix, or creating an original track and why?

ChrisB.: Remixes are fun because it allows you to take other peoples ideas and spawning your own from them. I typically find remixes easier that writing a while song from scratch. Writing something 100% original that kills it is always way more rewarding though.

Summer: Do you try to take in to consideration what your audience’s opinion of your tracks might be when creating them?

ChrisB.: When writing songs, the vibe of the song is highly affected by how I am feeling at the moment. Sometimes I’ll write a chill down-tempo song knowing I might never play it live unless during a sunrise set at Burning Man or something. I am my own worse critic so I usually don’t care what anyone else thinks just as long as I like it, I’m happy with it.

Summer: When you remix, do you begin with a track that’s already mostly completed and conform the stems you want to remix to it, or do you start bare bones with the stems and build the track around them?

ChrisB.: As far as remixing goes it depends on if I have access to the stems, in that case I have a personal relationship with the artist. Otherwise it’s a bootleg remix. When searching for bootlegs to remix I try to pick songs that are more along the minimal side of things so it really allows me to add all my own layers on top of it.

Summer: If you had to delete all but 3 plugins, which would you choose?

ChrisB.: I would keep Massive, Omnisphere and the Waves CLA Vocal plugin.

Summer: What is the best advice that has benefited you as a musician?

Summer: What do you feel is unique about your music?

ChrisB.: I have been recording more and more guitar lately and incorporating it with my music. I haven’t really heard anyone doing psychedelic 808 music with recorded electric guitar yet.

Summer: Sounds interesting. I look forward to hearing that and catching your upcoming sets. Thanks, Chris!

I’ve been meaning to post this one for a long time. Blue, it’s just lovely. And Willow Beats, what a cool name!  The male vocals remind me of Trey Anastasio’s and they’ve manipulated them in a very interesting way. I love how the zippy bass slides. You can definitely put this one on repeat.

This… THIS, is one of those songs that makes me literally scream out loud it’s so good. (Seriously, ask Bradley who was sitting near me….) INSTANT chills.  This is the best by Just A Gent, yet! I love  everything he does but this absolutely KILLSSSssss me it’s so good.  Hence, the insta post about it.

I can’t get over it, so I’m going to shut up now and start drawing something to it because this shit is gonna be on repeat AWLL DAYY. Share it, spread it like a love virus. Most importantly, FOLLOW HIM, this guy isn’t a one hit wonder or passing phase.

So Giraffage decided to remix The Dream’s 2007 album “Love Hate” and I’m thinkin that was a real good decision.  Each song has a chill smooth vibe to it that’s perfect for a Sunday afternoon.  You can throw this on and just feel good.  Maybe make a sandwich or maybe just sketch a quick realistic portrait of Morgan Freeman.

I gotta say my fav song is Falsetto. Why? Obviously the chipmunk voice.  If you add that in there, I will swoon and blog about it…but don’t get me wrong, it has to be a TASTEFUL chipmunk voice.  This is all about taste here folks.  Well done Giraffage, well done. 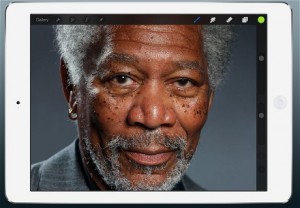 Seriously, if you’re Kyle Lambert you can whip up this rough sketch of Morgan to this album.