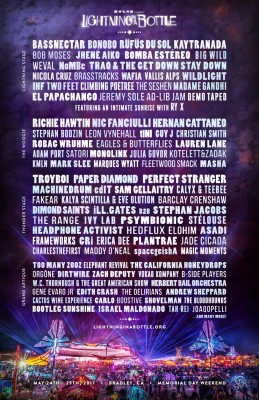 Early Bird tickets For Lightning in a Bottle go on sale today! Visit the LIB Website for tix before they sell out. (Only a limited amount this year) Last year was EPIC per the usual, so can’t wait to see you all there again!

This is what sold out looks like, people! Lightning in a Bottle hit full force in 2016 for it’s sell out debut. You’ll always remember that sweet last taste of magic before it hit maximum capacity, we know we will. Get swept up in this dazzling after movie:

Seeing the sprawling hills of Bradley, CA filling the rearview with colorful sunsets and enchanting memories the eleventh glorious Lightning in a Bottle concludes as the West Coast’s premier camping, arts, music and yoga festival again surpassing the expectations of all. Imagined and flawlessly executed by Los Angeles’ merrymaking collective of event production virtuosos Do LaB over Memorial Day weekend, LIB continues to ascend as a kaleidoscope of adventures and life changing experiences that will successfully surprise even the most seasoned revelers.

Returning to the San Antonio Recreation Area for the third consecutive time, LIB 2016 proved to be the biggest and best gathering to date as Do LaB cemented a major pre-event milestone in its rich, colorful history, hitting max capacity at 20,000 tickets weeks before the gates opened. Always striving for new growth and metamorphosis, 2016 brought inspiring expansions to the festival with the gates to LIB opening a day early on Wednesday May 25 to welcome eager passholders into its warm embrace which included a Village Action Day with an appearance from The Polish Ambassador and Ayla Nereo and the addition of the High Grounds camp, among many celebrated highlights such as a completely reimagined Woogie stage.

Sunny skies brought daytime dance parties, where The Woogie stage shone brightest. As temperatures turned up the heat, house and techno worshippers flocked to the prismatic awnings of the stage, which featured a fanciful entanglement of neon piping winding and wrapping around the DJ booth. Afternoon sets laden with misters and good vibes regaled audiences, where progressive producers such as Sacha Robotti, Justin Jay, Jonas Rathsman, Lane 8 and Lee Burridge took turns spinning long after the sun rays had fallen beyond the horizon. The Woogie also hosted an early Saturday morning memorial tribute honoring the late resident favorite Pumpkin, as many friends and family gathered to celebrate and dance under the magical canopy Pumpkin had played so many times before.

Twilight beckoned wanderers in search of the wonderfully weird and bass-centric beats, those who ventured into the evening found themselves fully immersed in the mystical offerings of the night, each stage brimming with late night sets. The festival’s other main stage the Thunder, an amped up version of Do LaB’s Big Fish at Coachella complete with the 2016 addition of visual screens, lived up to its namesake with showstopping, mesmerizing sets from the world’s preeminent bass music aficionados. Day and night, the Thunder unfurled a fury of innovative sound, culminating with long-time LIB’ing Legends Pantyraid closing out LIB 2016 with an unforgettable Sunday night set. Supporting acts over the weekend included Cashmere Cat, Ekali, Tokimonsta, Eprom, Dimond Saints, Mija and an incredible b2b by G Jones and Minnesota, who delivered one of the most dynamic sets of the weekend.

Keeping the tunes pumping throughout the day and long after the main stages went quiet after 2am were the Favela and Pagoda bars, which helped to ring in the weekend festivities by starting off the music on Thursday prior to the main stages coming to life on Friday and continuing into dawn on Monday. Surprise sets were key aspects of both stages, with LIB artists Patricio, Autograf and the Glitch Mob’s Boreta all stopping by for late night thrills.

Win an Ultimate Lightning in a Bottle 2016 Festival VIP Package!

Contest Rules:
Entries can be submitted until May 1 at 11:59PM PST.
Entries are handled through the Rafflecopter widget above. You may enter without any obligation to social media accounts, but you can gain extra entries through social media shares.
Your email address is required so we can get in touch with you if you win, but it will not be given out to any third parties.
Must be 18+ to enter. Contestants can come from anywhere in the world but need valid ID. Travel out to the Lightning in a Bottle festival will not covered.
Winners will be chosen randomly. One (1) winner will receive VIP Prize Package, One (1) winner will win the Second Tier Prize, and Five (5) winners will receive the Third Tier Prize.
Winners will be notified via email. Winners must respond within three days of being contacted to redeem prize. If you do not respond within that period, another winner will be chosen at random. Make sure that the email account you use to enter the contest includes your real name and a working email.
Prize packages are part of a promotional giveaway and non-transferable.

I don’t dance, I Woogie.

I think I hear a Woogie in the forrest… yep, it’s fast approaching. Check out this awesome teaser video from Glen Oaks Photography on the Woogie Weekend Facebook page. Tickets are available on Eventbrite this time, which is so much easier. Can’t wait to Woogie with you! 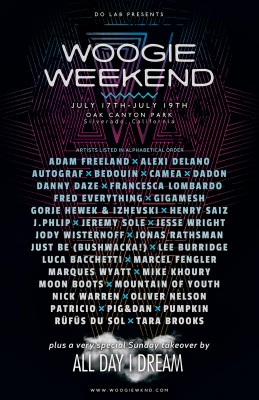 Last year, lightning in a bottle was the most surprising festival experience I had ever had; this year, the most fulfilling. My only regret is having not mastered macro scale quantum superposition so that I could fully experience everything the festival had to offer with out abandon.

I had been looking forward to seeing Stylust Beats for a while, so it was great to get to catch that set on the Thunder stage along with several of other favorites RL Grime, Griz, Koan Sound, Phutureprimitive and The Opiuo Band. Impressive headliners Such as Flume, Tycho and Odesza electrified the Lightning stage while the Woogie was nonstop dope beats; luckily I was camped near by because I couldn’t get enough.

There is so much more than just music to experience at LiB, countless yoga and workshops, holistically covering all aspects of health and consciousness. I was super stoked to get to catch Nassim Haramein, thought I had missed him earlier in the day, so I was over joyed when I heard his voice coming from the Temple Stage when haphazardly wandering by at 12am Sunday Morning.

In between it all were volumes of artwork on display and the Android Jones projection mapped dome was a huge hit. Particularly entertaining performance art acts this year included favorite, Lucent Dossier Experience, Dream World Cirque, Bubble Gutter and Les Sirens. Can’t forget about the newly remodeled Amori’s Casino and Burlesque for after hours entertainment.

It’s difficult for one person to give a full account of this festival, with so much variety, I can only share my sliver of experience and assure you that if you haven’t been to Lightning in a Bottle yet, you must experience it for yourself. Compared to the many festivals I’ve attended I believe this is a wonderful first time festival experience for a newbie. When I mentioned earlier that this was my most fulfilling LiB it was because I brought my friend from Miami who had never been and she had the time of her life, which was the ultimate highlight for me.

The Do Lab is bringing Woogie Weekend to the Oak Canyon Park festival grounds this July 17th-19th, check out the website for more details!

never have to worry

Lightning in a Bottle will be here before we know it and this video with footage from last year has me so excited already! I can’t wait to be singing along with headliner Flume and dancing until sunrise at my favorite festival of all. Stay tuned here for all things LIB including updates and featured artists tracks, visit their website for FAQ and ticketing information.

FestivalFestival Season 2015, flume, LIB, Lightning in a Bottle, The Confluence, The Do Lab
Share :